Procida island has always been the territory of strong devotions, especially the Marian one, perpetrated in the suggestive Sanctuary of Maria Santissima delle Grazie.
The Sanctuary is currently the most captivating aesthetic element of the skyline of the fishing village of Marina Corricella; since 1521 (the source is taken from Storia di Procida by Michele Parascandolo) there was already a church dedicated to S. Maria delle Grazie, inside there was the delightful image of the Virgin, whose origin is lost in time.
In 1854 this was adorned with gold and silver to thank for the liberation from the plague. Over the years the believers always gave their complete, active and above all strong devotion, that led to a solemn coronation of the prodigious image on August 10th, 1924 at the hands of Card. Alessio Ascalesi, a note of merit goes to the zeal of Parish priest, Mons. Domenico Amalfitano.
Shortly after, in 1930, also thanks to the coronation, the church became a Marian sanctuary. 1974 was an exceptional year, the year when it was celebrated the 50th anniversary of the Coronation, and the Marian community of Procida had the honor and the joy of the august word of the Holy Father Paul VI, who recited a beautiful message to a pilgrimage to Castelgandolfo on July 24th, 1974. After the Coronation this message from the Pope was the most beautiful gift that the Sanctuary jealously preserves.
Another moment of great importance was the Marian Year, announced by Pope John Paul II from Pentecost of 1987 to the assumption of 1988, in the perspective of the third millennium of the Christian area, celebrated with particular intensity in the Sanctuary, a privileged destination for pilgrimages; nowadays the Sanctuary is a compulsory stop for devotees and tourists, from all over the world.

The canvas has been repainted several times; taking into account the chromatic liveliness of the Virgin’s clothing with the solution of the head covered by the mantle, the color of the complexion and the perfect oval with the very softened features (characteristics of Mediterranean beauty), someone thinks that it could be the work of a pupil of Luca Giordano (M.A. Pavone).

Every year, the devotional mantle is hung on a sheet of plexiglas, and returns to be shown in the month of July, dedicated to Madonna delle Grazie: every morning at that time, at first lights of dawn, a devotional rosary is recited, all in the dialect of Procida
The main feast is the “Visitation” which, according to the Liturgical calendar, is celebrated on May 31st, but the island devotees keep the old date of July 2nd, deeply rooted in the heart and mind of the Procidani.

Every 5 years, this celebration has larger proportions: after a short path from the Sanctuary to the nearby Marina Corricella, where the image is traditionally transported barefoot, you embark on little boats, that are illuminated and adorned with flags: first in the streets and then in the Baia della Chiaia you can hear the moving songs without time to the merciful virgin; first from land and then from sea you can feel the strength of a centuries-old tradition based on sweet and spontaneous devotion typical of the relationship between a mother and her sons. 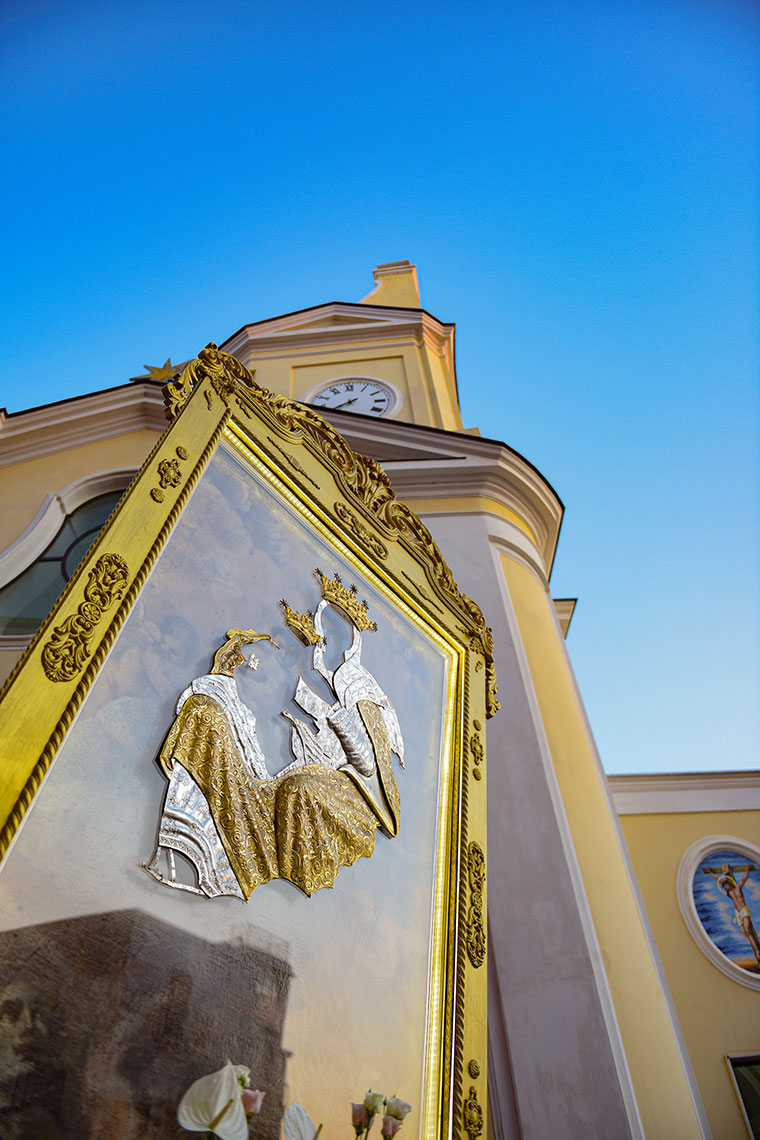